Discover Arles Through the Eyes of Van Gogh

A city of a great many historical and cultural touchstones, Arles has hosted endless era-defining moments since the Roman invasion of 123 BC.

The Roman and Romanesque Monuments, World Heritage listed since 1981, embody the city’s storied role in the Ancient era, one that saw Arles side with Caesar, produced philosophers such as Favorinus, and make huge inroads towards Roman Christianity. In the Middle Ages, Arles saw battles against Andalusian Saracens and Vikings, before prospering politically and economically from the 12th century until the dawn of the French Revolution of 1789.

What has arguably cemented Arles’ reputation as a city of significant cultural merit is its service as the home for the legendary painter, Vincent van Gogh. Although he only lived in Arles for a year, beginning on 21 February 1888 before a rather unceremonious exit in May the following year, he produced over 300 paintings and drawings while here, including some of his most iconic works.

Through the eyes of Van Gogh, Arles was a ‘foreign country’, equally fascinated and perturbed by its locals: the innocence of its children and the hard-drinking barflies contrasting like ‘creatures from another world’. Nevertheless, Van Gogh was struck by Arles’ landscapes, reflected in the lightness of colour his work possessed during this time.

Here, we’ll take you on a journey through the most enchanting pieces Van Gogh painted while in Arles. 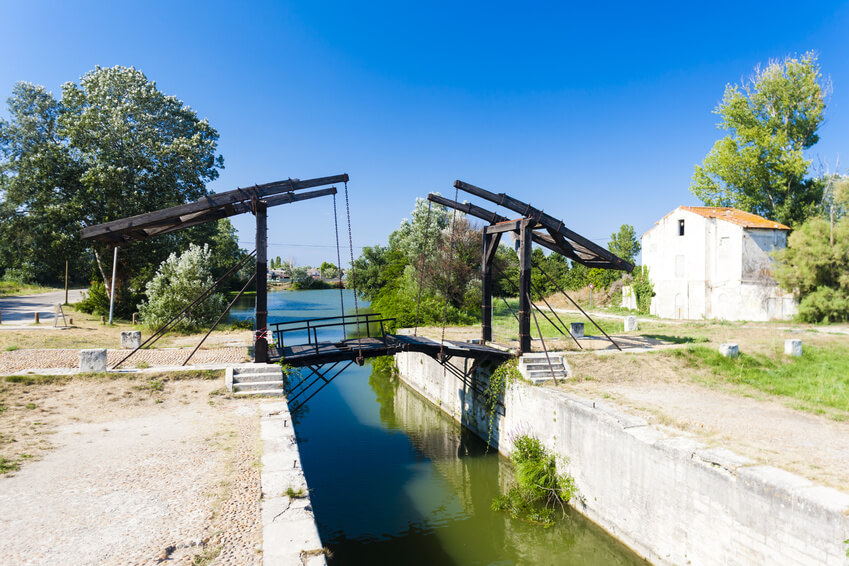 Directed by the simple, bold colours of Japanese woodcut prints, Langlois Bridge at Arles merges formal with the creative. Reminding him of his native Netherlands, the drawbridge on the canal inspired in him the solace he so desired during his time in Arles.

To capture the reflecting light, Van Gogh applied the paint thickly and with high contrasting colours like blue and yellow to capture the vibrant scene, while a perspective frame was employed to deliver the precision angles and perspective of the bridge, banks and background housing.

An important painting in his career, the reconstructed Langlois Bridge was renamed Pont Van-Gogh in his honour after WWII.

Beginning in June, Van Gogh took a trip to the fishing village of Saintes-Maries-de-la-Mer while convalescing from a period of ill health. Quickly making two paintings of the sea in only a few days, enamoured with the water’s changing hue and the boats shored up on the sand.

In all, Van Gogh captured the scene of the coast six times, with pen, pencil, ink and watercolour editions delivering the serene, untroubled images in sharp relief. For Van Gogh, September was marked by several key pieces, including The Night Café – a vividly coloured yet hauntingly solemn painting that’s considered a masterpiece by many art critics and scholars.

A favourite of the man himself, Van Gogh wrote fervently about The Night Café to his brother Theo, effusing about its exaggerated colours and emotive world-building. Particularly noted by art critics, the powerful perspective absorbs onlookers into the scenes of down-and-out despair. Floorboards, walls and a billiard table converge on the curiously lit doorway, adding a sense of mystery to the painting’s already enigmatic power.

With the exterior documented in his painting, The Yellow House, Van Gogh turned to the confines of his lodgings for Bedroom in Arles.

Though obviously a small room, the bright hues and odd angles of the piece add a strange jauntiness to the painting, a quality Van Gogh said was suggestive of a dream. Distinctly lacking in shadows, something that was deliberate on the part of the painter, who preferred the simple, plain colours to speak for themselves.

Originally painted in October 1888, the third and final version was completed in September 1889, after Van Gogh had left Arles.

Starry Night Over the Rhône

Not far from where Van Gogh roomed in Bedroom in Arles, the painter became obsessed with the challenge that night-time painting presented. In Starry Night Over the Rhône, the splendour of Arles at night comes alive with rich, deep blues and contrasting, contemplative yellows.

Another painting that is almost dream-like in its presentation, the curious brickwork pattern of the sky and the strolling couple in the foreground add mystique to the piece’s arresting colours. Also of note is Van Gogh’s capturing of the ‘Great Bear’ constellation, an interesting addition since the painter was largely known for his subjective and, of course, impressionistic take on his surroundings.

Painted during a particularly happy time in Van Gogh’s life, letters to his friends reveal a contentedness with his new home, blessing the piece with a bittersweet element that’s at-once serene and haunting.

Initially conceived in Paris, but fully realised in Arles, his most iconic painting is perhaps indicative of the unfettered creativity that flowed through Van Gogh during his time here.

Painted during a period of artistic zeal, Van Gogh was working on three paintings at the same time as Sunflowers. Indelibly linked to the artist, the series of paintings produced during this time show an increasing experimentalism in technique. The first version was bold in colour but perhaps bound by a comparative classicalism, but with each new version, the form lessened, the colours became more centred on shades of yellow and the piece as we know it came to be. 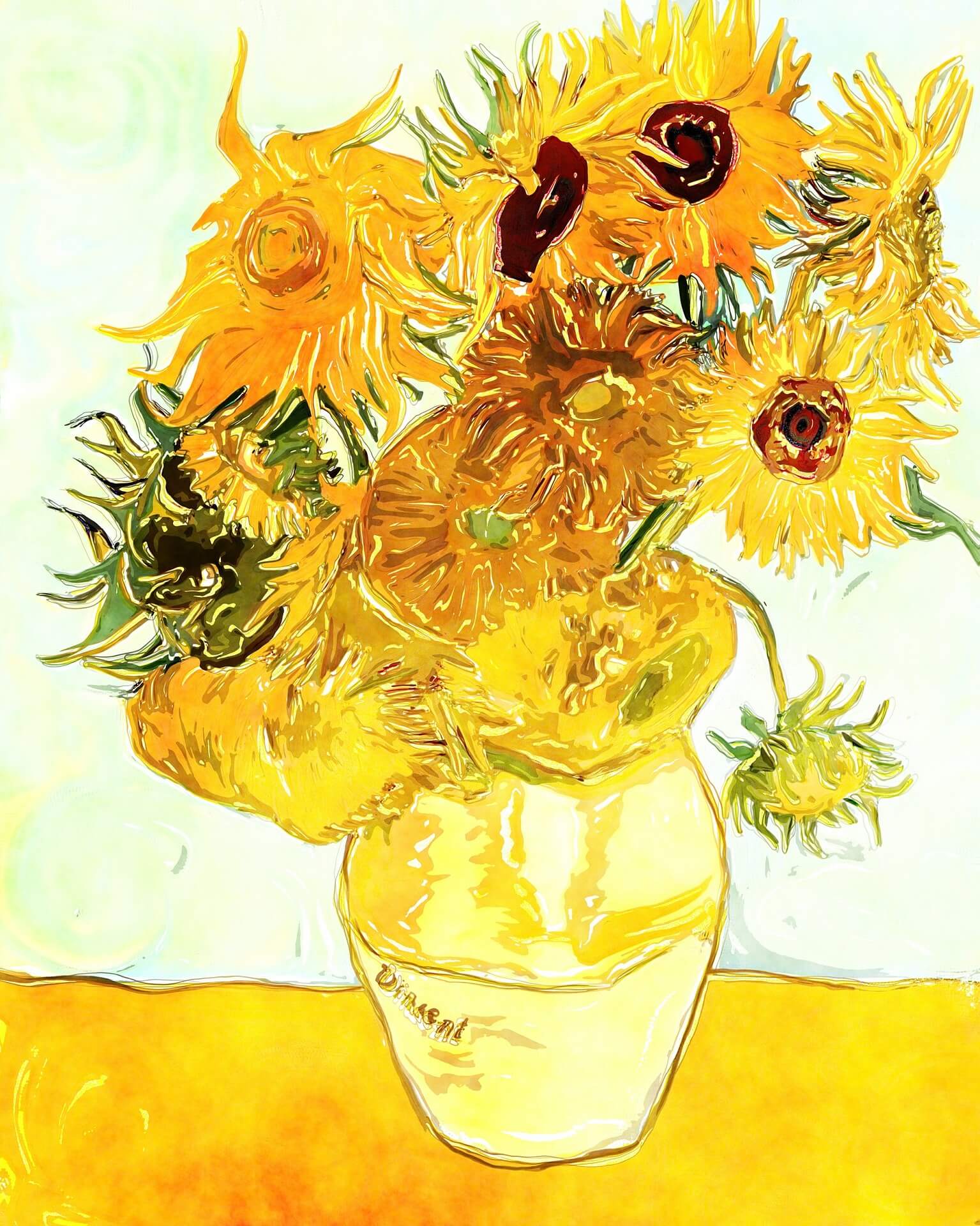 Considered unusual at the time, Van Gogh’s Sunflowers caused a stir in the art world. “I don’t know what painting is anymore”, exclaimed one artist. Another withdrew his art from an exhibition in Brussels because it shared a room with Van Gogh’s most famous work. Even into the 20th century, when it was displayed as part of the seminal Manet and the Post-Impressionists exhibition, feathers were considerably ruffled, with one Morning Post critic deeming Van Gogh a lunatic.

Featured in our Sensations of Southern France itinerary, Arles’ cultural impact is something to behold. If this foray into some of Van Gogh’s most iconic pieces has inspired you, why not head over to our dedicated itinerary page here, or for more booking information, call our helpful sales team on +44 161 236 2537.