Experience the Magic of the Irrawaddy in 10 Photographs

Immortalised as Kipling’s ‘road to Mandalay’, the Irrawaddy is your passage through ancient and storied lands, where colourful temples, pagodas and stupas dot the landscape, and local people hold true to a humble way of life centuries in the making.

From Mandalay, a cradle of culture at the heart of Myanmar, to the intoxicating bustle of Yangon, a city dominated by the iconic Shwedagon Pagoda – the Irrawaddy introduces a region of immersive history and traditions. Our experts have travelled the course of the river to experience its arresting highlights, bringing you exclusive cultural encounters which go beyond those afforded to the ordinary traveller – for a pure and authentic journey.

One such expert is Cruise Director Robert Kalemba, who recently returned from a cruise on the Irrawaddy, bringing back with him wonderful memories of his time on the river. Today, we’re sharing Robert’s insights and experiences of Myanmar as we explore the wonders of the Irrawaddy – transporting you from Mandalay to Yangon in 10 inspiring photographs. Dominating the Yangon skyline with its distinctive gilded stupa, Shwedagon Pagoda is a monumental heritage wonder, and the foremost Buddhist pagoda in Myanmar. Built over 2,600 years ago by the ancient Mon people, Shwedagon is renowned for its towering 326-foot-tall stupa, visible for miles around and one of the most enduring sights on the banks of the Irrawaddy. The pagoda is believed to house artefacts from four previous Buddha, including the water filter of Konāgamana, strands of Gautama’s hair, the staff of Kakusandha, and a piece of rope once used by Kassapa.

Inle Lake and the Intha People Travelling the waters of Inle Lake, Robert experienced first-hand the “the raw, untouched beauty of Myanmar and its people”, saying of the lake’s native Intha people: “These people are healthy, happy and, to us, live a simple but uncomplicated lifestyle full of love for their community and family. Whilst next to no one speaks fluent English, it is so rewarding to engage in broken English and body language, as you play a small part in building new tourism and economy in these remote and precious regions.” As you too explore the colourful banks of the lake, you’ll encounter the enchanting floating villages of the Intha, and experience the skill and prowess of the region’s famous leg-rowing fishermen. 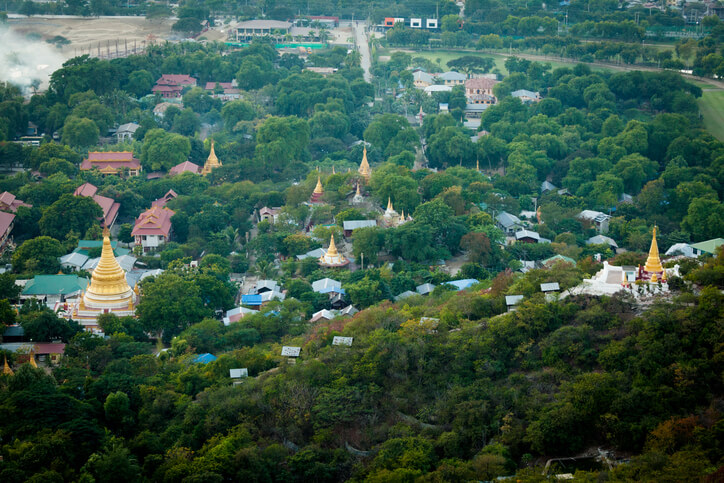 While the ancient byways of Mandalay are alive with curiosity and wonder at street-level, the city is revealed in true splendour at the summit of Mandalay Hill. This 800-foot-high rise overlooks the city, and has been an important Buddhist pilgrimage site for centuries. As such, its pathways and stairs are rich with pagodas, monasteries, statues and mosaics, but it’s the summit which makes trekking up the hill truly worthwhile. Here, you’ll find the impressive Sutaungypei Pagoda, overlooking one of the most inspiring views it’s possible to imagine. For those feeling active, we urge you to take the climb and discover the real beauty of Mandalay. 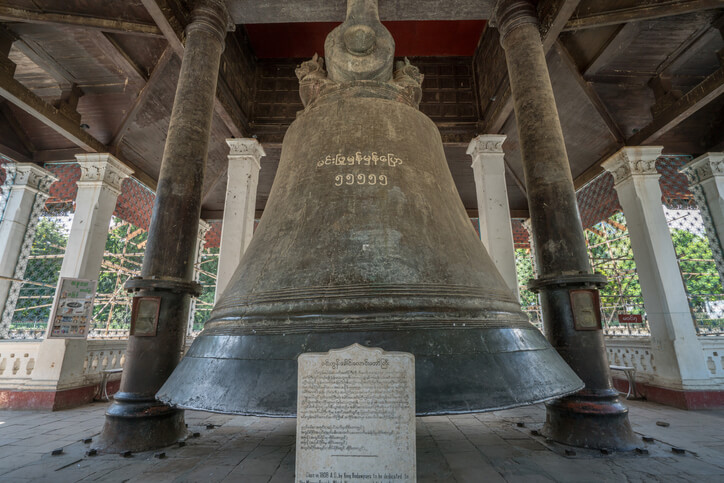 Discover the riches of Myanmar’s Sagaing region in Mingun, a town renowned for its monumental stone sculpture, Pahtodawgyi, whose construction began in 1790 and remains unfinished to this day. One of the highlights of Mingun is its great bell, which was originally constructed to hang in Pahtodawgyi upon its completion. Weighing in at some 9200,00lbs, the Mingun Bell is one of the world’s heaviest functioning bells, and is still in use today, with local people using it to signal the start of morning prayer. Standing in the shadow of this enormous bell from its position on the western bank of the Irrawaddy is a humbling experience, and a testament to the ingenuity and skill of Myanmar’s ancient civilisations. 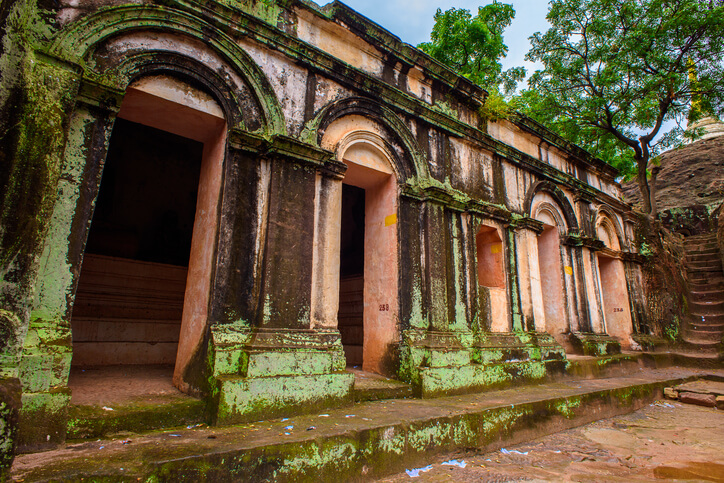 One of the most distinctive Buddhist heritage sites of Myanmar is Hpowindaung (also spelt Phowintaung), a vast complex of caves dotted with ancient carvings, mosaics and gilded statues. This incredible cave system is built into a sandstone outcrop on the western bank of the Chindwin River, the largest tributary of the Irrawaddy. It’s thought to contain over 940 richly-decorated caves, some of which contain mosaics and sculptures dating back to the 14th century. Archaeologists continue to make new discoveries at Hpowindaung, making it one of the Monywa and Sagaing’s most prestigious heritage sites. 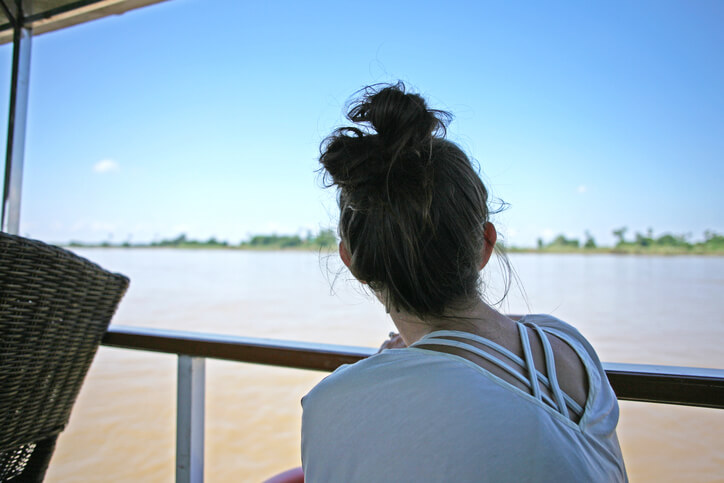 As you travel steadily southward, the Irrawaddy grants access to remote villages accessible only by the river. Here, encounter local life at its most simple and time-honoured as you explore the rural streets of Hnaw Kone and Yandabo by traditional oxcart, observing local craftsmen at work. As part of EmeraldPLUS, you’re invited to visit a local school and meet the children and schoolmaster, for rare insights into life in one of the remotest regions of the Irrawaddy.

Robert fondly remembers his time in this hard-to-reach region, saying: “I would urge the adventurous to take a morning stroll before breakfast and meet the local people. Seeing their routines, their customs and their way of life in these enchanting twilight hours is a very humbling experience.”

Boasting a collection of over 2,000 Buddhist pagodas, Bagan is among Southeast Asia’s richest and most significant archaeological sites, and the ultimate destination for budding photographers hoping to capture the colour and scale of Myanmar’s heritage monuments. For Robert, Bagan proved one of the highlights of the journey, and one that revealed Myanmar’s immense heritage in all its depth and splendour.

He said: “Bagan, and its sheer volume of religious pagodas, is simply breath-taking. The landscape is littered with structures as far as the eye can see, providing the perfect backdrop to an iconic, trip-defining photograph. Early one morning, I left the ship for a walk around the area, taking little dirt tracks away from the river’s edge. In the distance, I could hear religious chanting, cowbells and birds, and stumbled across an old monk taking part in the morning alms ceremony. That special moment will remain etched in my mind always.”

The Colonial Heritage of Salay 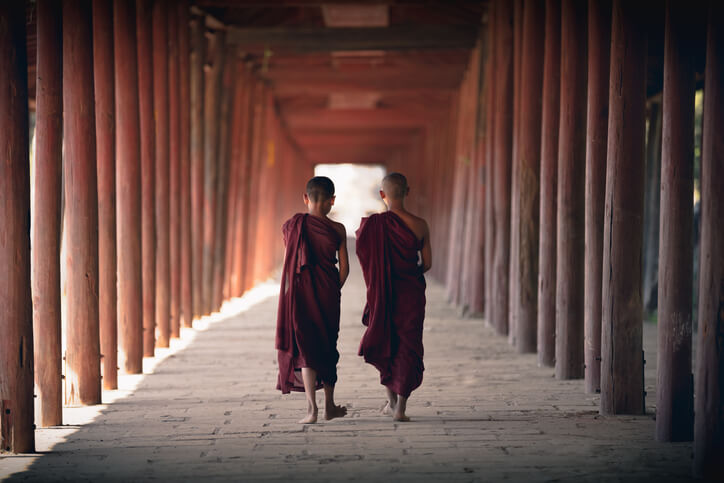 Burma’s colonial past is evident throughout the passage of the Irrawaddy, but is perhaps captured most charmingly in Salay, a historic 13th-century village whose remote location has helped to preserve its magnificent colonial-era architecture. Stroll the rustic dirt pathways of the village, tracing the footsteps of the French and British soldiers who lived here over 200 years ago, before visiting the extraordinary teak monastery of Yoke Sone Kyaung Taw Gyi, which was designed to perfectly resemble the Crown Prince House of Mandalay.

Welcome to the district capital of Magwe, where you’ll enjoy an exhilarating trishaw ride through the city, stopping off at the city market to sample local delicacies and browse regional handicrafts. After visiting the Mya Tha Lun Pagoda of Naguttama Hill, a walking tour of the inimitable Minhla Fortress reveals more of the region’s colonial heritage. This imposing stone fort played a decisive role in the Third Anglo-Burmese War, helping to repel the British from reaching the Royal Palace of Mandalay. Interestingly, the fortress was built by Italian architects Commotto and Molinari – adding to the colourful heritage of the region. One of the most pivotal trading posts in ancient Indochina, Pyay (or Prome as it’s also known) boasts a captivating heritage, and is one of the earliest settlements to merge on the banks of the Irrawaddy. During a visit, you’ll explore Thayekhittaya, one of the ancient Pyu Kingdoms that flourished between the 5th and 9th centuries, and have the chance to discover the wonderful artefacts of the Sri Ksetra Museum. Later, explore the immense heritage of the Shwesandaw Pagoda complex, one of the most significant Buddhist pilgrimage sites on the banks of the Irrawaddy.

Join Emerald Cruises on the enchanting passage of the great Irrawaddy, and experience the Southeast Asia of your dreams. Our dedicated ship, the Irrawaddy Explorer, offers safe and luxurious passage through these immersive lands, so you can look forward to the ultimate journey of discovery. Click here to browse our collection of Irrawaddy river cruises.