Connecting the continent, the Rhine-Main-Danube canal is Europe’s greatest man-made passageway – engineered to allow seamless travel from the North Sea to the Black Sea.

The Rhine, Main and Danube rivers may be wonderful in their own right, but together, they create one of the foremost river routes in the world. Since the early 1990s, these illustrious waterways have provided effortless passage across the breadth of the continent, with river cruise guests able to travel from the Netherlands to Romania uninterrupted thanks to the Rhine-Main-Danube canal.

But what exactly is the Rhine-Main-Danube canal, and how has it affected tourism and trade on the rivers of Europe? Here, we’re taking an in-depth look at this engineering marvel, from its origins and history to the highlights you can look forward to on its waters.

What is the Rhine-Main-Danube canal?

The canal itself spans over 100 miles, running from the city of Bamberg to the town of Kelheim via Nuremberg. By no means a straight passage between the two destinations, the canal meanders through the German landscape, with 16 locks in place to account for the extreme difference in height (above sea level) between the two rivers.

Those with an interest in canal locks and river navigation systems will relish the opportunity to witness the Rhine-Main-Danube canal’s vast lock gates in action. Over the course of the passage, the locks lift ships up to 406 metres above sea level, with some of the largest gateways requiring a transit time of around 30 minutes to raise or lower the ship to the required height.

Negotiating the lock systems of the Rhine-Main-Danube canal is challenging, with some of the narrowest gateways leaving just centimetres to spare on either side of the vessel. Happily, the Emerald Cruises Star-Ship fleet are piloted by some of the very best crew in the world, who make passing through the canal’s complicated locks seem simple.

The locks work like any other canal, except on a much larger scale. Your Emerald Star-Ship will cruise into the lock, move into position and set the engine to idle. Then, the remote control locks gates are engaged, sealing the ship within the lock chamber.

When the water reaches the required level, the lock gates re-open and the ship can make way. Due to the complexity and time of passing each lock, traversing the Rhine-Main-Danube canal takes a full day of travel, though this is usually broken up with stops in Bamberg and Nuremberg.

The history of the Rhine-Main-Danube canal

While the Main and Danube rivers weren’t officially connected until 1992, an intercontinental canal linking the Rhine, Main and Danube isn’t a modern idea. Records show that man has contemplated linking these passageways for over 1,000 years, with King Ludwig I of Bavaria coming the closest to realising this dream in the 18th century.

The Danube, Rhine and Main rivers have been an essential part of European trade since the Roman Age. For centuries, these waterways acted as frontiers between warring nations, as well as vital passageways on which to transport goods across the continent.

It makes sense, then, that generations of rulers, inventors and engineers pained over the task of linking these three passageways. Accomplishing this feat would have a profound impact on trade routes across the continent, affecting not just Germany but nations from the North Sea to the Black.

But alas, no such link was completed, until, in 1921, the German Reich and the Free State of Bavaria commissioned the construction of a trade route from Aschaffenburg to Passau. In the coming decades, major works took place along the route of the Main, though much of this progress was halted and later abandoned in the fallout of WWII.

In the post-war years, however, when Germany was seeking to rebuild its status and wealth, works began to rebuild and develop the Main-Danube canal, with the project officially completed in 1992. Since then, countless ships have cruised the passage, providing seamless travel through the heart of the continent.

Highlights of the Rhine-Main-Danube canal

The peaceful German town of Kelheim lies at the most southerly and easterly end of the Rhine-Main-Danube canal, and it’s here where the canal finishes and the Danube begins. While most of our river cruise itineraries don’t designate a whole lot of time to exploring Kelheim, highlights to look out for as you pass through the town include Weltenburg Abbey, the Danube Gorge and Liberation Hall. As part of a daily excursion in the nearby city of Regensburg, you’ll have the chance to visit the Kuchlbauer Brewery in Abensberg, a small town within the province of Kelheim. Here, learn about Germany’s love of wheat beer from passionate experts, before raising a glass to the end of your German adventure on the remarkable Rhine-Main-Danube canal.

Our Splendours of Europe river cruise gives you the chance to see Abensberg and visit its esteemed brewery. 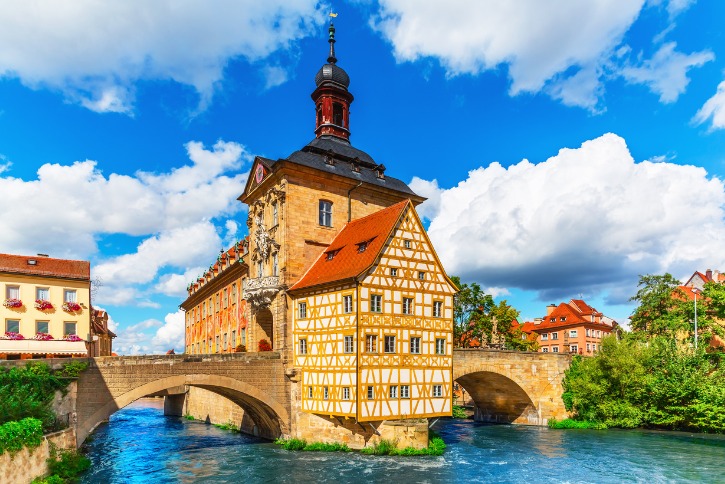 Bamberg is among the most historically significant cities in Germany, its beautifully-preserved medieval heart boasting some 2,400 listed buildings. Indeed, in 1993, much of the city’s old town quarter was designated UNESCO World Heritage Site status, owing to the captivating beauty of its 12th-century architecture. As part of your visit with Emerald Cruises, you’ll enjoy an in-depth guided tour of some of Bamberg’s key heritage sites, including the old and new residences of the Bamberg bishops, the beautiful timber-framed Old Town Hall, and the domineering keep of the medieval Altenburg Castle. Travelling east, this is the starting point of your journey on the Rhine-Main-Danube canal. The Rhine-Main-Danube canal sweeps in a glorious, north-to-south arc around the ancient city of Nuremberg, giving you the opportunity to stop off and immerse in the city’s rich heritage. Like Bamberg, Nuremberg is dotted with medieval architecture and historic timber-framed buildings, typical of Bavaria. Of course, the city is also renowned for its links to the Nazi war trials, a legacy you can explore as part of a visit to the WWII Documentation Centre. Following this, join your fellow guests at the Bratwurst Röslein restaurant for a guided beer tasting – the ideal way to celebrate the end of your visit to this vibrant German city.

Entranced by the engineering prowess and heritage highlights of the Rhine-Main-Danube canal? Join us on one of our many award-winning European river cruises and experience this spectacular waterway for yourself. For more information or to book, visit the homepage or call us on +44 161 236 2537.

Christmas time on the Danube
Budapest to Vienna
5 day
From (EUR)
€ 1,425
View Cruise

Christmas Time on the Rhine
Frankfurt to Basel
5 day
From (EUR)
€ 1,425
View Cruise

Danube Delights
Budapest to Munich
An unforgettable cruise down the iconic Danube & through the heart of old Europe. Walking tours, invitations into the homes of locals & sightseeing excursions showcase the magnificence of yesteryear.
8 day
From (EUR)
€ 1,845
View Cruise

Danube Delights
Budapest to Nuremberg
An unforgettable cruise down the iconic Danube & through the heart of old Europe. Walking tours, invitations into the homes of locals & sightseeing excursions showcase the magnificence of yesteryear.
8 day
From (EUR)
€ 1,845
View Cruise

The Majestic Rhine
Frankfurt to Basel
Your journey through Germany includes a visit to see Siegfried’s Mechanical Musical Instrument Museum, while Koblenz, Mannheim’s beautiful architecture the Black Forest will be sure to amaze.
8 day
From (EUR)
€ 1,845
View Cruise

Danube Explorer
Munich to Budapest
Walk the cobblestone streets of Medieval cities, explore Austria’s wine-growing region and marvel at the fusion of old and new in musical Vienna and eclectic Budapest.
8 day
From (EUR)
€ 1,895
View Cruise

Delights of the Danube
Nuremberg to Budapest
8 day
From (EUR)
€ 2,495
View Cruise

Enchantment of Eastern Europe
Budapest to Bucharest
As the final stretch of the Danube weaves its way through the depths of eastern Europe, meet locals for lunch in their home, enjoy tours of Osijek & Belgrade & marvel at the beauty of the Iron Gate.
9 day
From (EUR)
€ 2,045
View Cruise

Danube Delights & Classic Prague
Budapest to Prague
Extend your journey with a three-night stay in the Czech capital, after your journey from Budapest invites the beauty of Bavaria, lunch with a Slovakian family and magnificent Vienna.
11 day
From (EUR)
€ 2,270
View Cruise